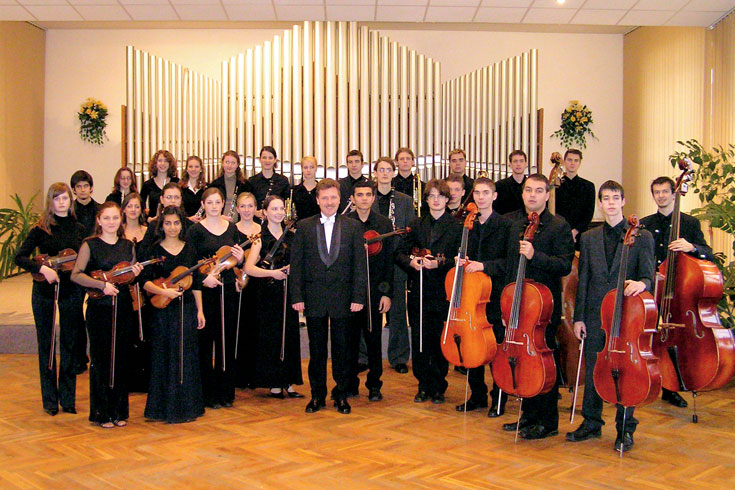 The Chambre Orchestra came into existence in 1994 two years after the Conservatoire had been established. Initially it served only for educational purposes and special preparation of students for their professional orchestral practice.

An important landmark in the activity of the orchestra was a cooperation with Italian conductor Enrice Volpe, the headmaster of the Conservatoire in Cosenza. Under his supervision the first independent orchestral program was studied and then presented in 1996 and 1997 during the two tours in Italy, where the Chamber Orchestra participated in more than 30 full-length concerts.

Within the partnership between the Conservatoire of J.L.Bella and the Conservatoire in Bourgoine-Jallieau our Chamber Orchestra together with the Girls/ Chorus took part in concerts in Grenoble, Lyon and Bourgoine- Jallieau under the baton of Mrs Katarina Korenova.

Since 1999 Mr Igor Vlach is a chief and conductor of the Chamber Orchestra.

Under his conducting the orchestra has become the most reputable student orchestra in Banska Bystrica region. The Chamber Orchestra gives concerts regularly. It performs in all school /s important events and records for the Slovak Radio as well. There was a successful cooperation in 2001 with the Slovak State Television in learning the Ch.W. Gluck/s opera – Orpheus and Euridice.

The members of the orchestra concretize with other smaller artistic groupings: