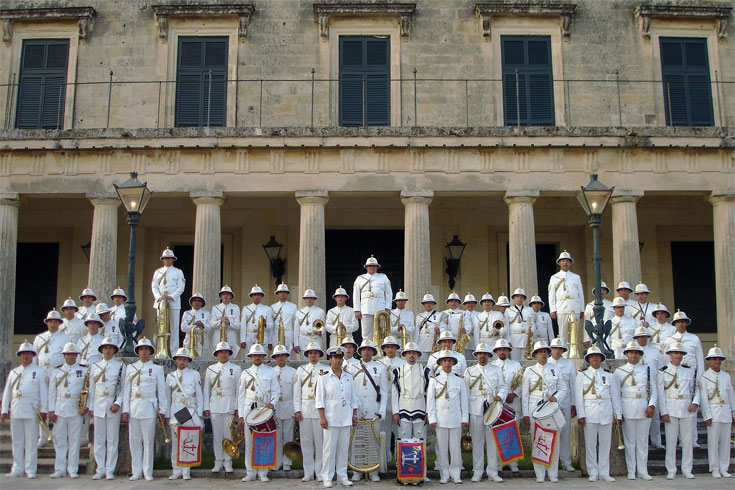 The first musical department of the Hellenic Navy came together in January 1890 and comprised 22 musicians who were enlisted as volunteers. This musical department became permanent members of the Flagship of the Fleet. After the Balkan Wars, the number of musicians increased satisfactory by enlisting new volunteers. In August 1925, the School of Musicians – Buglers was founded at the Administration Directorate of the Salamis Naval Base. From 1932 until 1936 the School of music was transferred to the Progymnastirio on Poros, only to be transferred back to Salamis Naval Base from 1936 – 1941.

During World War 2, the Music department followed the fleet’s exodus to the Middle East, installed on the passenger ship IONIA until 1943 and from thenonwards on the battleship AVEROF. In 1946 the School moved to the Palaska Training Centre in Skaramanga, where it has remained until today. Apart from the School, there are now two permanent Music departments, one at the Slamais Naval Base and one at the Cretan Naval Base in Hania.

In its 119 years, the Hellenic Navy Music department has achieved a wide range of actions on military, social and cultural levels both in Greece and abroad. It holds concerts and participates in national and religious ceremonies all over Greece. It has participated in International Military Music Festivals abroad:

as well as for anniversaries of foreign states:

and has assisted in celebrations of national anniversaries for the Greek community in America.

The Hellenic Navy broadcasts programmes both on television and the radio. It took part in the Opening Ceremony for the Athens Olympic Games in both 1896 and 2004.

Its orchestra accompanies the educational trips of the School of Naval Officers and Petty Officers and has played at receptions for local authorities in ports of all the continents of the globe. The executives of the Music department are members of the “Banda de la NATO”, a mix of music groups from NATO Member States which is based in Naples, Italy.