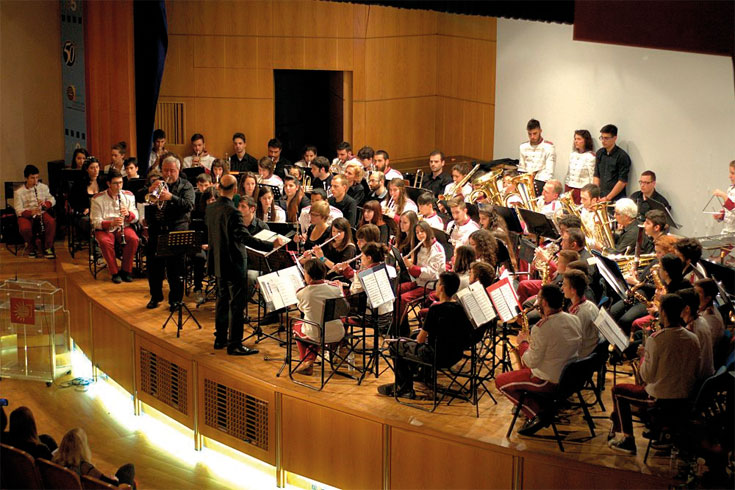 Thirty one years of artistic merit accomplishes this year the Municipal Wind Orchestra of Kalamaria.

Since then offers specialized music education and participated in more than 1.000 concerts, National Anniversaries or religious processions in Hellas or abroad.

Worthwhile mentioning its concerts in Thessaloniki’s Megaron, Film Festival, International Faire, the participation in Hellenic Broadcast’s documentaries, its 16 participations to the International Youth Band Festival of Sindos, the cooperation with the Ampelokipi Wind Orchestra, the performances abroad (U.S.A., Canada, Sweden, Germany, Slovakia, Romania, Bulgaria) and the concert honouring the world renown composer Mikis Theodorakis. The 50-membered orchestra, supported by 25-membered feeder program, studies and performs a wide ranged repertoire. From Early Music for Winds, orchestrations of classical pieces, to film, jazz, pop, rock and folk music all over the world and of course numerous pieces of Greek music most of them arranged for choir also.

Since 1991, Director of the Municipal Wind Orchestra of Kalamaria is Yiannis Koukas.

The wind band of the Municipality of Ampelokipi-Menemeni is a multimember music ensemble which consists of 60 volunteer musicians.

A common characteristic of all the members of the concert band is the quest and love for music which has been written and composed for windband. The specific windband is an active participant in the cultural and musical festivals in Greece and abroad.  In 2011 after a formal invitation the band participated in the cultural Summer festival in Slovakia and Hungary.

Moreover, in 2009 in collaboration with the philharmonic orchestra of the municipality of Kalamaria they took part in several cultural events in Romania. In the Summer of 2010. In the summer of 2010 the windband organized a nine-day seminar in Pelion that was directed by the conductor George Hatzinikos. Furthermore, in the summer of 2012 they performed in the international Diffwinds Band festival in Luxembourg.

Finally, in July 2013 the Band travelled to Bulgaria (Burgas, Pomorie, Nessebar, Varna and Plovdiv) in order to give several concerts.

The Philharmonic Wind Orchestra of the Municipality of Ampelokipoi-Menemeni is conducted by the Band Conductor Nickolas Chrysohoou.