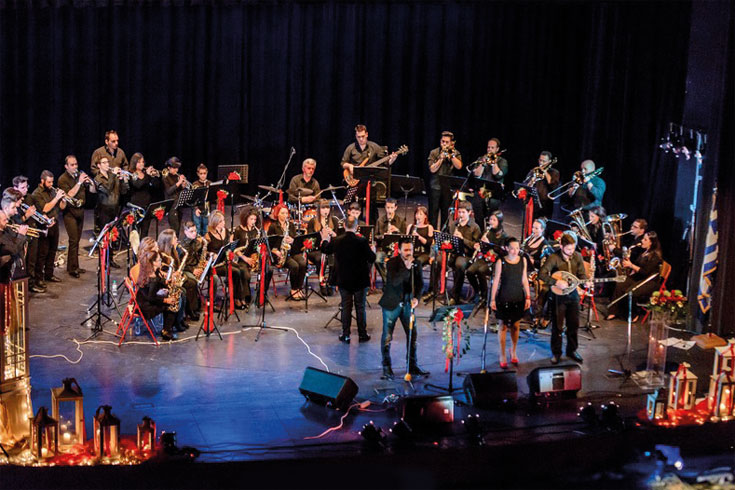 The Municipal Philharmonic of Lamia is one of the oldest established philharmonics in Greece (founded in 1896). It is one of the most important cultural organisations of the city and of the country. From its founding until today, it boasts an important and diverse body of work in the field of culture. It offers its services at various religious, social and cultural events, participating in national celebrations and making distinguished appearances, including concerts and parades in many European countries. Its aim has always been to uphold, improve and spread our musical heritage, and above all to offer free musical education.

Magic Brass Orchestra: This is the most popular ensemble of the Municipal Philharmonic of Lamia. It was until recently known as the Variety Music Orchestra. It was formed in 1989 and flourished throughout recent years, coming first in important events for the high standard of its musical training and for the musical spectacle it offers. It is now in its most creative phase of renewal and reformation.

This renewal arose from an inner need. It was mainly enhanced by the recent overt copying of a wide range of elements that were first adopted by the orchestra. Such as the way it presented its program (as a musical spectacle), its background and even its name. For this reason the orchestra was renamed to Magic Brass Orchestra. Now the band appears under its new name. From 1989 to mid-2006, the orchestra performed in concerts in Greece, Europe and the USA. It made various appearances on Greek and foreign television and represented Greece at important international festivals around the world. It has also been recognized, awarded and established as a pioneer in the presentation of uniquely orchestrated musical performances enriched with show ideas.

The orchestra is led by conductor Dimitrios Mantas.