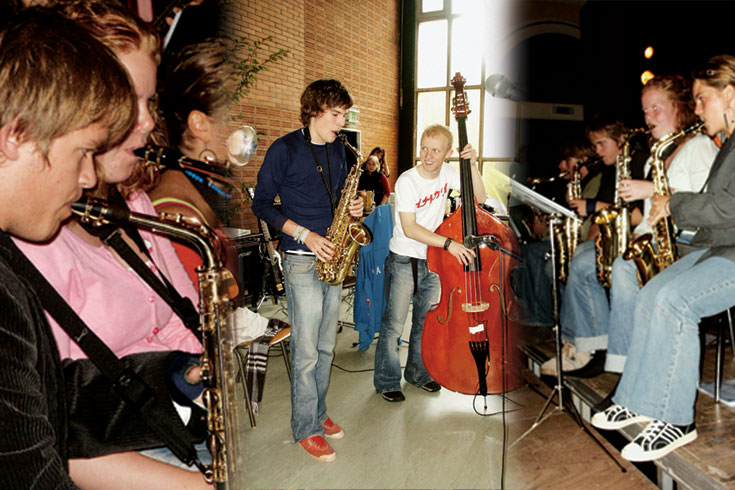 The Big Band of the Music School of Nykobing Falster has existed for 20 years. The music school was not very old when the idea of creating a Big Banc was breeded. The town needed a band at an advanced level, so that one could inspire and draw interested young people to the new established music school.In the beginning the band was in a combo – or “almost” – format with six or seven horns and a rhythm section. The aim of course was to form a big orchestra, a full up Big Band. After some years we have succeeded, especially because of: Through the years the Big Band has had and still has a great advertising value for our music school. The yearly New Year – concerts in the town of Nykobing, by various workshops and Big Band – meetings (sometimes with established soloists from the Danish jazz scene). Club – jobs and society – arrangements, by school – concerts and gymnasium – balls, by concerts in Tivoli Garden in Copenhagen, by foreign concert – visits the Big Band has succeeded in promoting the Music School of Nykobing Falster.The course has been kept and the orchestra has for many years been a melting pot for young talents. Many of these talents today support themselves as musicians and music – teachers.

Conductor of the Big Band of the Music School Nykobing Falster orchestra is Henning Soderberg.