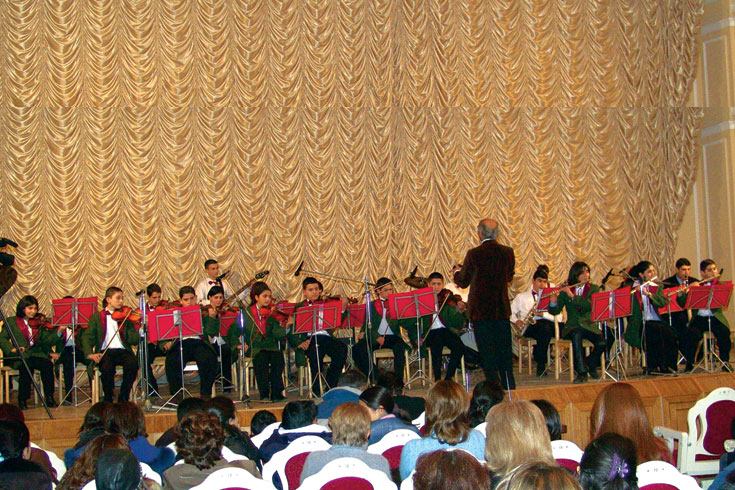 The “Children’s Philarmonic Society” of Yerevan (the capital city of Armenia) named after Y. Bakhshyan, was created in 1994 and encompasses the Chamber and the Pop Orchestra, Folk – dance groups with Folk – instrument players and Sport – Dance group. The first director of the Pop Orchestra was the “Cultural Honoured Worker” of the Armenian Republic, Melik Mavisakalian.The orchestra gave numerous concerts presenting both Armenian and foreign works and accomplished tours in Dnipropetrovs’k, Sochi, Syria and Hungary. In 2003, participated in the “Youth International Festival for the Arts and Crafts” from the member states of the “Organization of the Black Sea Economic Cooperation” in Crimea. World famouse Armenian composers such as Yervand Erznkian, Ruben Amirbekian worked with the Pops orchestra.Since 1997 up to now, the Art director and conductor is Stepan Gevorgian. He is also the director of the “Arevik” consort of the Armenian Radio and Television and supervisor of the State Circus Orchetra. The 17 membered Chamber Orchestra of the “Children’s Philharmonic Society” of Yerevan is a high standard ensemble with international recognition. Beyond the numerous performances in Armenia and abroad, performing a wide range repertoire of: It brings into effect conductors’ master classes with teachers from Japan, Canada (Nuran Armand) and the Aret Director and the Main Conductor of the State Chamber Orchestra of Armenia, Aram Karabekian. The leading musicians of the orchestra are performing separately as a quartet.

From the establishment of the Children’s Philharmonic Society of Yerevan orchestra in 1998 and the qurter in 2004, director is Aida Nalbandian who is also the leaderof the Armenian Philarmonic String Orchestra and a professor of “Komitas” (the national composer and ethnomusicologist) Yeravan’s Conservatory.